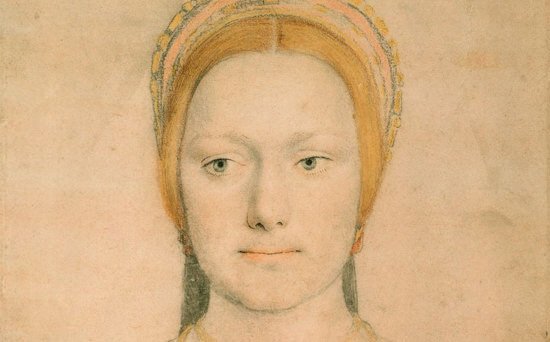 I was in London last month to catch the Encounter: Drawings from Leonardo to Rembrandt exhibition, held at the National Portrait Gallery until 22 October 2017.

I was particularly interested in studying the collection of portrait drawings by Hans Holbein the Younger on loan from the Queen’s Royal Collection, Windsor Castle.
I’ve always admired Holbein’s oil portraits at the National Gallery London and the Uffizi Gallery, Florence but only ever seen images of some of his drawings in books.

The exhibition room was quite small, the lights low with very few other visitors and it really felt such a privilege to view these drawings in such an intimate space.

The walls were painted a dark Prussian Blue and many of the Holbein drawings were on a muted pink ground hung side-by-side in a line. They were all relatively the same size and the first thing I noticed as my eye jumped across them, was the variety of silhouette shapes created by the headwear and angle of the pose gave a real sense of the sitter.

You can’t help your mind wandering back to the Tudor Court of Henry VIII and wondering about the characters in the portraits (and for the fans of ‘Wolf Hall’ I have to admit, I was silently humming the theme tune)

They felt so fresh with some of the contour lines reminding me of a Singer Sargent’s portrait, it’s pretty amazing to see how contemporary these drawings looked considering they were drawn over 400 years ago. 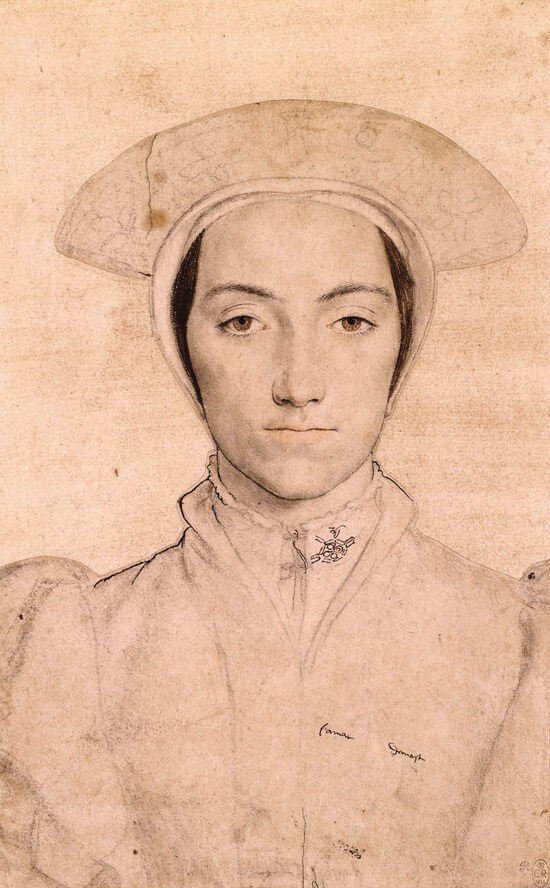 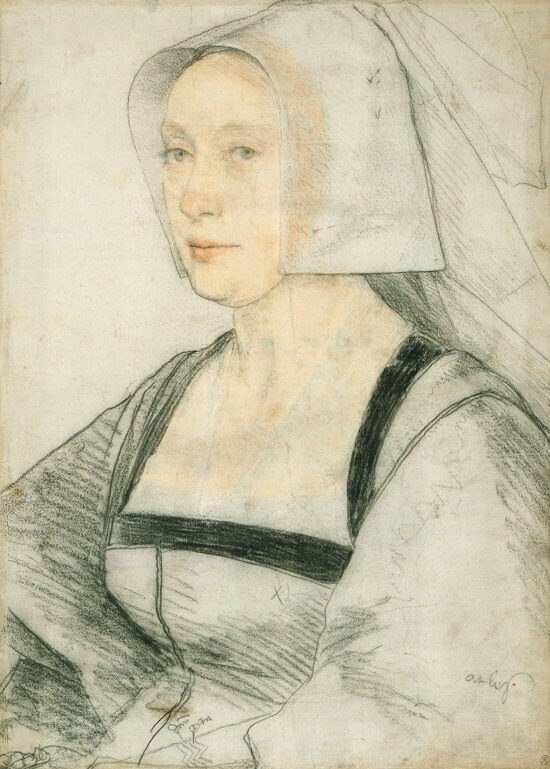 Hans Holbein The Younger (c. 1497 – 1543) was a German artist with great versatility. He was a skillful draftsman, printmaker and jewellery designer, although he was best known as a painter and widely considered one of the finest portraitists of his era.

Born in Augsburg, Germany, Holbein travelled to England in 1526 after having had a successful career in Basel, Switzerland.

His first portraits were of the German merchants housed in the Steelyard in London and his circle of clients quickly expanded to nobility and later became the Court Painter to Henry VIII.

He was a natural talent and turned his fluid line to designs ranging from intricate jewellery to large-scale frescoes but he also had a great teacher.

His father, Hans Holbein the Elder was also a painter and ran an art and craft studio in Augsburg taking on commissions ranging from illustrated books, woodcuts, printmaking and church window designs. His two sons, Ambrosius and Hans worked and developed their craft under his tutelage. 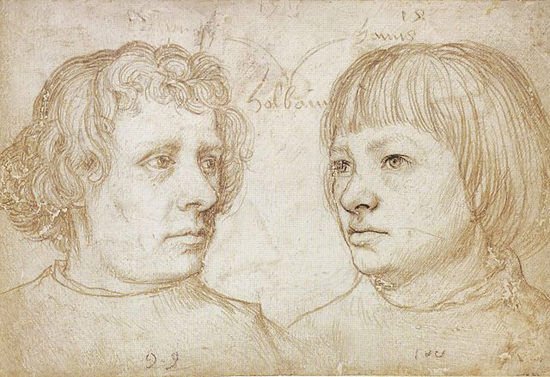 The names “Prosy” (left) and “Hans” (right) are written over the heads of the two figures and you can see where Hans Holbein the Younger developed his style of portraiture with strong contours.

It is not known exactly when Hans Holbein began working for the King of England, but it is thought to be around 1536 and is considered the artist who brought the Tudor age to life.

His full-length portrait of Henry VIII has influenced our image and perception, establishing that iconic powerful image of the King. 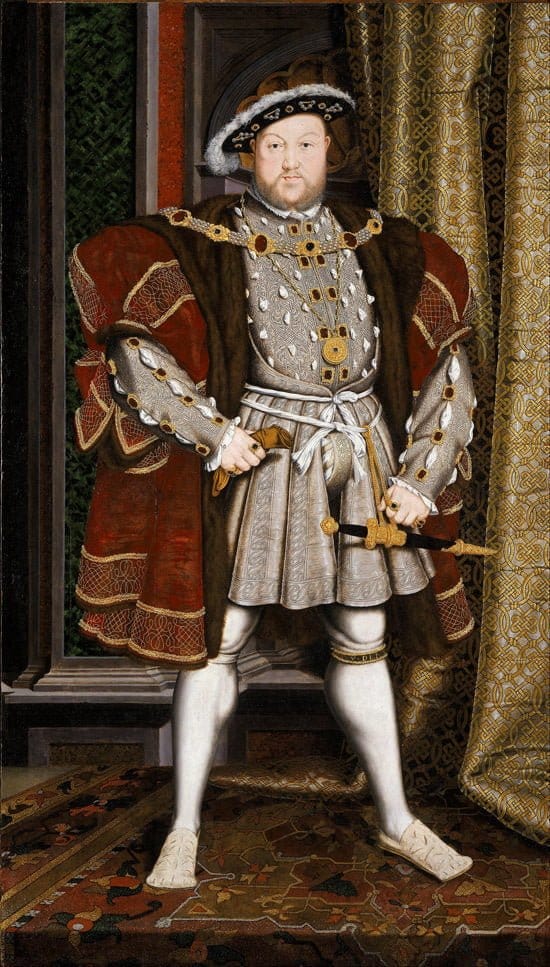 This portrait is a copy of a scene painted on the Whitehall Mural, created by Hans Holbein in 1537, the mural was destroyed by fire in the 17th century, but several copies of the section showing Henry VIII survive, of which this is probably the best.

In addition, Holbein was often sent to Europe to sketch realist portraits of potential brides for Henry, due to his accurate rendering of faces.

Within the Royal Collection, there is a series of drawings connected to the Court of Henry completed by Holbein between 1526-43. The majority of which are kept in the Royal Library at Windsor Castle.

They were at some stage, bound into an album often referred to as the ‘Great Booke’ interestingly, there is a very pale pink-coloured line around the outer edges of most of the Windsor drawings which could indicate the remains of a border used in the books binding. 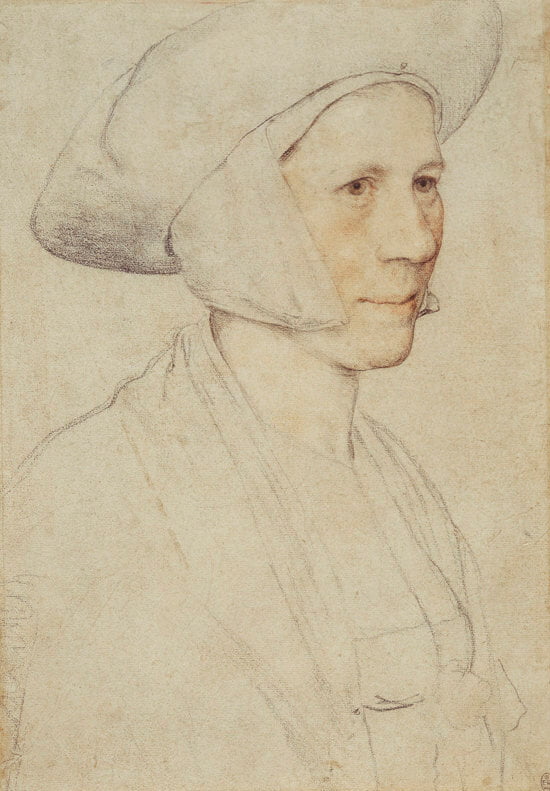 Holbein tended to capture the face of the sitter leaving more sketchy abstracted lines for the clothes in most of his drawings. He also changed mediums depending on the part of the portrait he was sketching. It is thought that he started the portraits using red chalk, then moved onto subtle shading for the contours of the face, a fine line of coloured chalk for the features and then finally a dark black ink for flat blocks of tone on the hats.

This changing of mediums creates a much more complex rendering of the face, whilst still ‘reads’ from across a room due to the darker handling of key features. 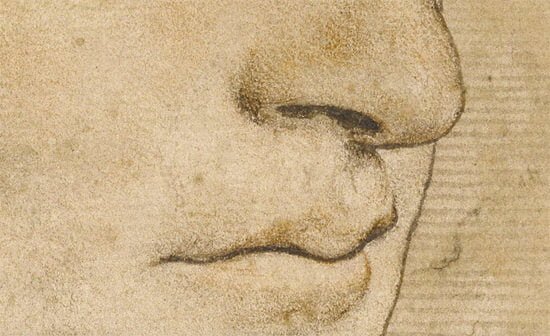 Detail, Portrait of a Scholar or Cleric, Hans Holbein the Younger (not in exhibition)

The close up above shows how soft the rendering is on the outer edges of the lips, with the cooler grey being used in the form of the lips at the edge of the mouth and then a crisp, dark contour to describe the shape.

There is many a lively debate as into why some of the darker black chalks are much more prominent than the soft warm chalks. Some believe that the red chalk has been smudged and faded over time, others that the black chalk was added at a later date. 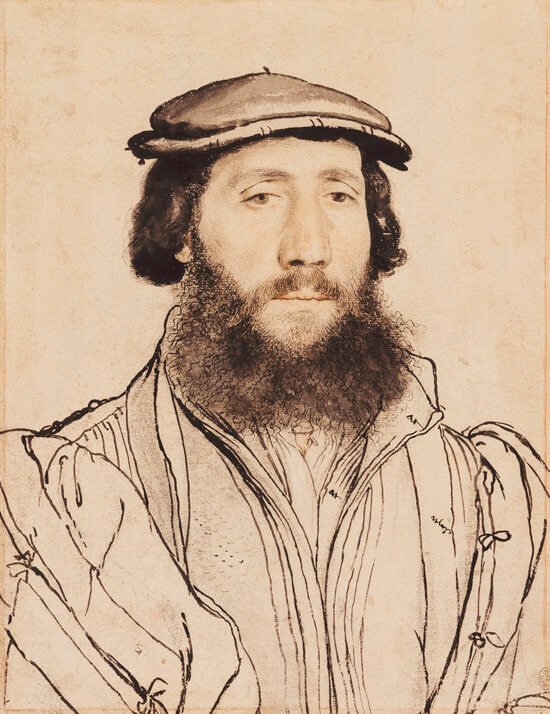 The other key technique that Holbein utilised was working on a coloured ground.

Using a pinkish coloured ground gave a great base for portrait sketches, the added grey of chalk worked in the shadows – like the grey used in a grisaille. The pinks were created by mixing Calcium Carbonate (chalk) mixed with a Vermillion Red pigment. 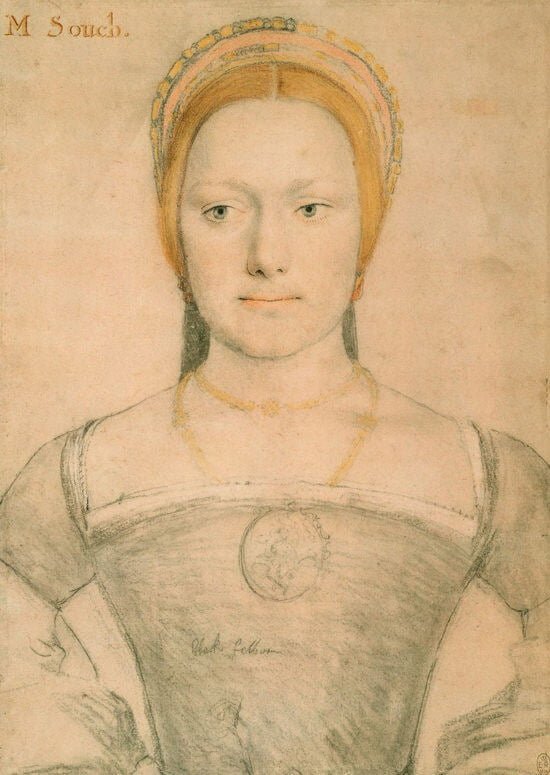 Holbein would have had a range of pre-prepared drawing papers and selected the tone depending on the complexion of the sitter. Much like Turner, who prepared a range of coloured grounds before going out landscape sketching, Holbein used the method as time-saving techniques to quickly establish a likeness, it has been studied that colour accuracy of peoples faces can be as important as the drawing to recognise the sitter. 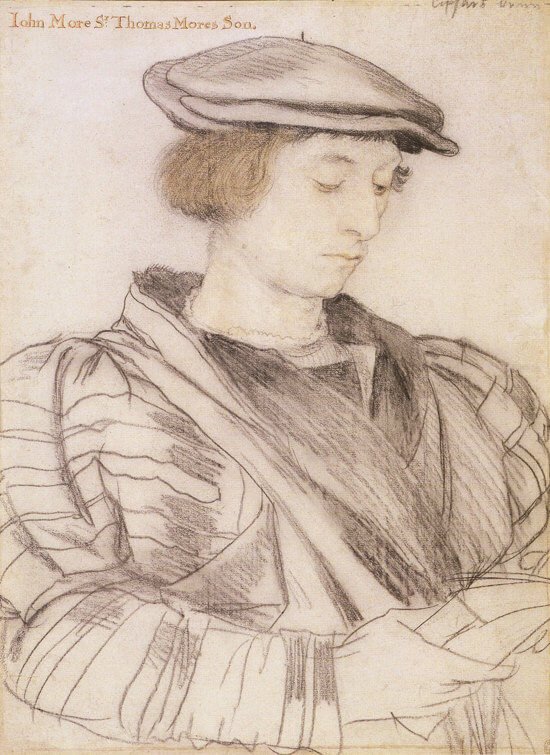 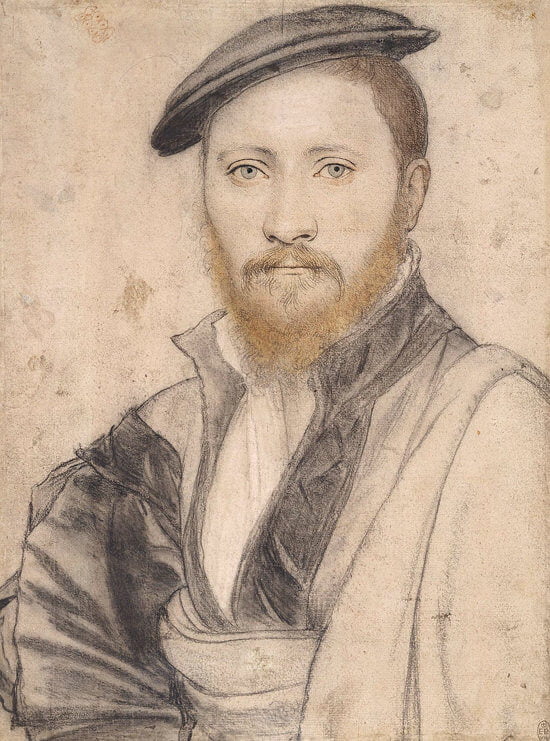 You can see Holbein wasn’t scared of adding a touch of watercolour to further enhance the portrait and push the value range.

In this drawing, there is a semi-opaque white watercolour on the shirt and a blush of blue watercolour (gouache – often called bodycolour) in the eyes. It’s amazing how we read the face as being flesh coloured because of this inclusion of the warmth of the beard and the blue in the eyes, remember, portrait colours are never viewed in isolation.

If you’re composing a portrait painting yourself, having a look at the spaces around the Holbein portraits can be a valuable lesson in the importance of the clothing.

They can really describe the character and nature of sitter and help to create an interesting composition. In this case, it’s hats and headdresses which gives interest and enables a range of shapes and colours as well allowing a looser handling of the drawing. 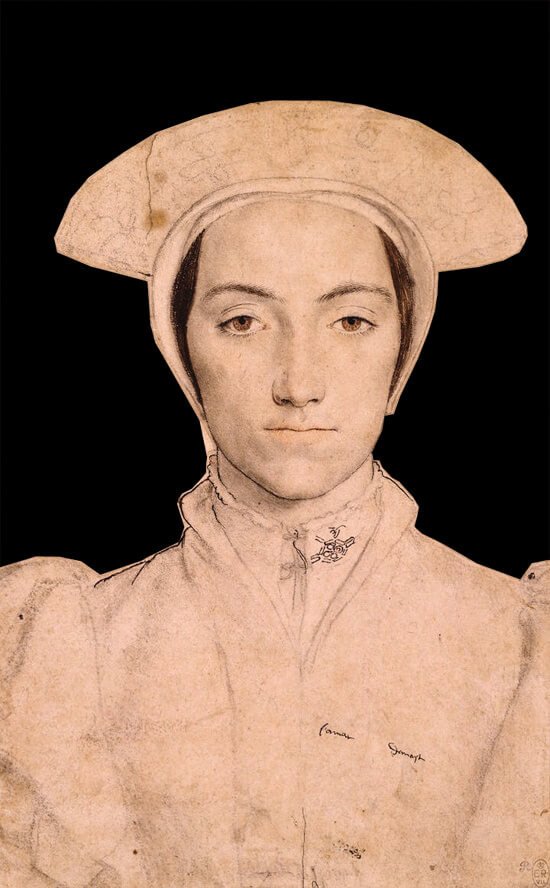 When we focus on the shape around the head, it shows the symmetry of the composition but also the smooth curved flowing lines. The top of the hat is a semi-circle, the collar has a curved edge and the puffed sleeves just leaving the frame, echo this circular motif. 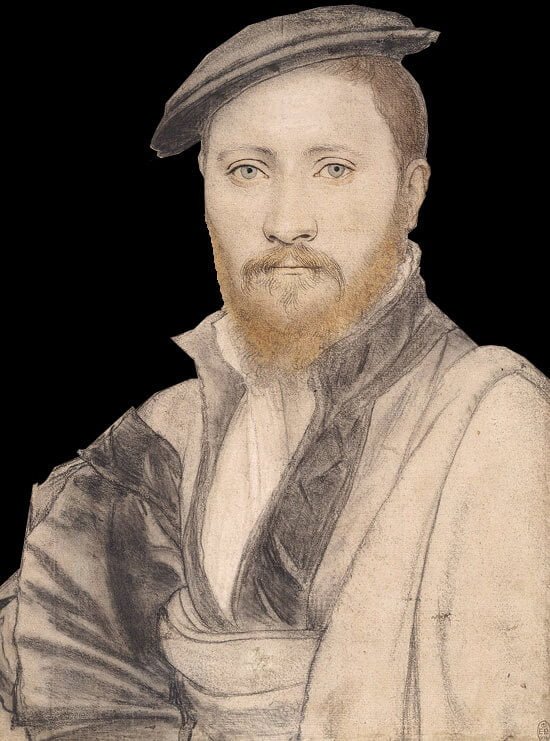 On this figure, Holbein has posed the sitter in more of a ‘power pose’ because of this the negative shape is more angular. A sharper edge to the hat on the top right, a crisp v-shape to the collar and an angular shape to the sitters’ sleeve. 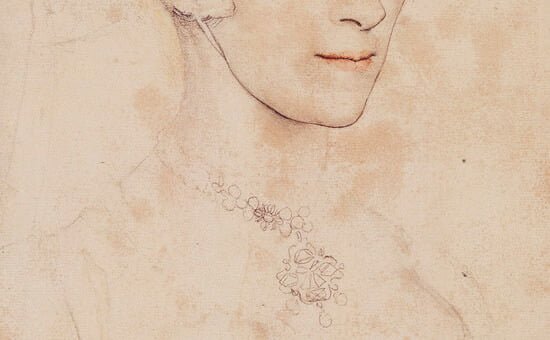 The fine line of the jewellery in the drawing above is achieved using a method called silverpoint, and within the Encounter exhibition, a number of works from other artists use this technique.

Silverpoint is drawing with a stylus of silver onto a prepared primed surface (it won’t make a mark on ordinary paper). A traditional ground for silverpoint would have been a coloured rabbit skin glue solution using bone ash, chalk and/or lead white. The chalk or pigment gives a slight texture (know as a tooth) to the ground, so the metal transfers onto the surface.

Why does silverpoint look brown? The wonders of oxidation.

The first marks you make with silverpoint do look grey, but as the lines are exposed to the atmosphere they tarnish to a warm brown tone. This process can develop over several months and the speed of oxidation depends on the air quality the drawing is exposed to, also different metal points will oxidize to different colours, copper, for example, turns slightly green.

Before Graphite was used in pencils, drawings were created using a range of soft metal rods, mainly lead, tin and silver. All of the metals worked in a fine point, so you’ll see lead point, lead-tin point, silverpoint and goldpoint drawings, depending on the metal that was used.

Pro tip: Lead is softer than silver so makes a mark without having to prepare the surface. The downside of the softness of lead is that it can easily blunt, so mixes between lead and tin were made to create a balance between soft and hard points. This is much the same as modern pencils which are a varying combination of graphite and clay to create a range of hardness or softness (9H through to 9B, the H stands for Hard and the B stands for Black)

To Create a Modern Silverpoint Ground

Paint the ground onto an absorbent surface, you need the paper to have a bit of weight so you don’t get any buckling.

You can use a thick watercolour paper, about 300gsm in weight. Using a Hot Pressed paper will give you a smoother surface to create a fine line drawing with silverpoint. Archers, Saunders Waterford or Fabriano Artistico is nice, but you can also purchase pre-prepared metal point papers ready for drawing onto. Or you could use illustration board, Strathmore 500 series Illustration Board is good.

To learn more about toned grounds and working with chalks the Drawing: Light & Shadow Course introduces a variety of mediums and techniques.

When does the exhibition finish?

The show is on at the National Portrait Gallery, London from July 13th until 22nd October 2017.

There are a number of other drawings including a Rembrandt sheet of head studies and a Leonardo da Vinci anatomical study, but for me, Holbein was the star of the show.

p.s. If you’ve studied the Acrylic Portrait Course and happen to be in Paris in the next couple of months, the Petit Palais has an impressive display of 150 Zorn paintings. I’m wondering if I can tempt Vanessa with some Champs-Élysées shopping!

The Importance of Contrast in Painting