With an Art Studio move to the Sea!

A few weeks ago, on the first wave of lockdown easing, we had a chance to explore and meet some of our new neighbours.

They had grey fur, hidden ears, and love fish.

Looking down into Mutton Cove is a grey seal colony, close to the South West Coast Path.

After years of painting trips and holidays and a rollercoaster of a property search, we’d finally found our dream studio in Cornwall.

Let’s call it a project.

It hasn’t been used as a studio for the past 15 years or a home for at least 10 and has an eclectic range of buildings that Vanessa will have to perform her interior magic on. 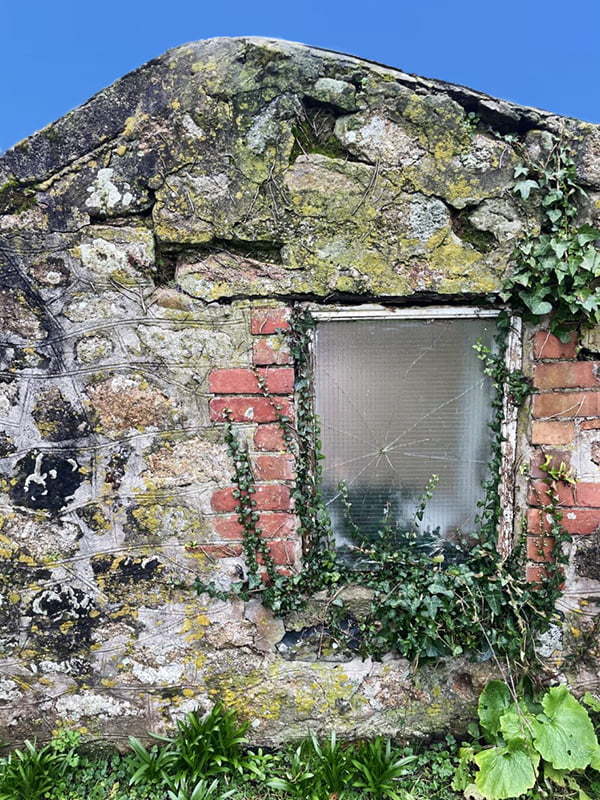 So far there has been really amazing light, large amounts of ice cream and late-night beach sundowners, alongside leaking roofs, invasive ivy, copious amounts of whitewashing, and many, many skips.

But, amongst all this, is an absolutely epic space that was once the working studio of Royal Academy artist Sandra Blow. It does feel a real privilege to be able to bring this building back to life, as an artist studio for myself and a ceramic studio for Vanessa.

I’ll have some more studio shots soon to show the progress on the renovations but until then I have been enjoying being outdoors and discovering new landscapes.

Spectacular coves, long, sandy beaches, and just offshore is Godrevy Island with a lighthouse. Simple in shape, a classic motif of a lighthouse, that breaks the horizon and can be seen from many miles away.

On the northern side of the headland is Mutton Cove, home to a large grey seal colony which you can see from the clifftops.

As a child, Virginia Woolf spent long summer holidays at the family home in St Ives, with a view towards this bay and it is said to be the inspiration for her novel To the Lighthouse, and the photo above was on the walk up to it.

You’ve got this fantastic crescent shape that goes into the cliffs, and then the dark shape of the rocks in the foreground. Lighthouses can be great subjects to paint in a landscape because the dash of white helps to add contrast and focus. It reminded me of Scotland and some of the views around the Isle of Skye.

Loved how this was just one isolated surfer, right in the centre of the frame, set against the enormity of the ocean.

The surfer was running full pelt to get into the water. You’ve got this curve underneath the rocks that frames him perfectly and the iconic shape of a surfboard gives a great silhouette. It’s amazing how small this is in the frame, but you can still get a sense of the enormity of the sea.

I like how the clouds have patterned the sky like a potato print, and all these tufts and texture of the grass in the foreground echo that pattern.

This is just around the corner from Mutton Cove, it’s an incredibly exhilarating cliff-top walk with fabulous ocean views and rocks breaking in the surf.

Boardwalk to Godrevy Lighthouse, Will Kemp

When you’re deciding on a subject to sketch, I find having a few general guidelines really help, below are my 7 principles that help to create a successful landscape sketch.

#1. Proportion & Scale – Looking for a variety of shapes, spaces, and scale to add depth and perspective to your drawing.

So I’m always looking for a range of scale and a variety of shapes, ideally, the same objects that are similar in size if they were placed next to each other, but give the illusion of scale and depth when they’re set within a scene.

#2. Composition – Taking the eye for a walk – bringing the viewer into the page rather than across the page.

In the drawing, there are two different things.

Because I’ve done this sketch in pen, only using black and white, it’s harder to see differences in tonal value. This principle is more to be aware of if you’re going to painting the scene. If I were to paint it, the Lighthouse would be more subtle with lighter values than the stronger contrasts in the foreground. That would help to give an idea of atmospheric perspective, and getting lighter into the distance.

This is a nice example of atmospheric perspective, notice how light in value the far land is in the distance.

#4. Changing your Viewpoint – Viewpoint & positioning yourself in vast landscapes – changing your position to achieve maximum results with the drawing.

To get a good viewpoint before I sketched,  I moved off to the side off of the path, and kind of hunkered down a bit so I could get the shape of the eroded cliff that comes out into the mid-ground. Because it’s positioned just below the coastal edge there’s still a space to help frame the mid-ground shape.

#5. How to Frame your View – Thinking inside a frame – using your edges to help you draw, splitting your composition within the frame to create tension or harmony.

Without having the frame around this sketch, you wouldn’t read the sky as anything, it just goes on forever. Just having that border around the piece really helps, you can suddenly start to see a sky and a sea. You’ll also notice how I haven’t placed the boardwalk centrally, it’s on the right-hand side, so, that kind of curves your eye into the drawing.

#6. Choosing a Focal point – Choosing and being aware of a focal point and bearing your concept and final result in mind – when to break the rules in your sketches.

So, usually, I do a sketch to see if it’s got a good drawing foundation, but actually from doing this sketch realised it might work better as a painting,

You can study these lessons more in-depth in the landscape sketching course.

And I’ve recently discovered that seals are not the only wildlife to be found locally, as our most recent neighbour is a baby seagull chick who has hatched on our roof!

Went for a late-night jaunt down to the Harbour to see if we could spot the full Strawberry Moon which was visible in the UK’s last night, and it was incredible! Just got a glimpse before it snuck behind some clouds.

Have a great weekend!

The Rule of Thirds in Landscape Painting