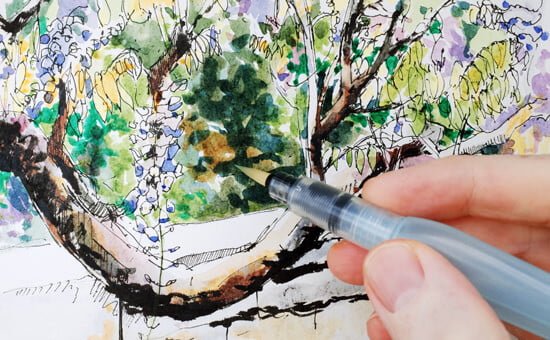 I’d travelled through the Cotswolds many times before, captivated by the golden glow of the honey-coloured stone buildings, that just seemed to lend themselves to being painted.

The earthy tones of yellow ochre complimented by soft dull lilacs of wisteria-laden-branches create a really mellow colour palette, you then have crumbling walls surrounded by trees and foliage that bring in a bright sap-green colour pop… 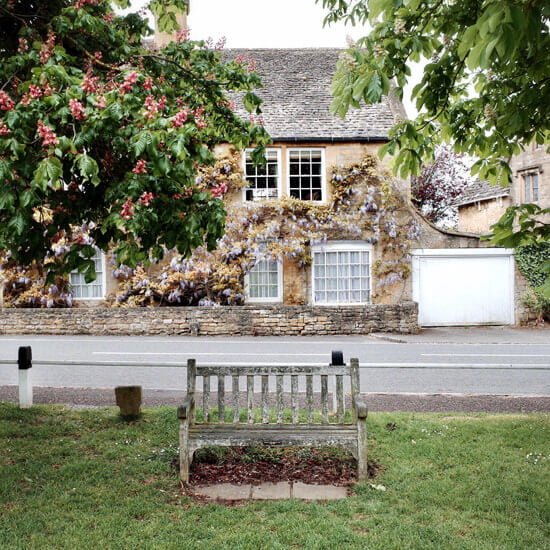 Bench on the Green, Broadway, Cotswolds

White painted fences and gate posts sit next to dark 17th-century leaded windows, the environment just seems to have this lovely inbuilt combination of contrast and warm golden light.

“Even when the sun is obscured and the light is cold, these walls are still faintly warm and luminous, as if they knew the trick of keeping the lost sunlight of centuries glimmering about them.” J.B. Priestley describing the area. 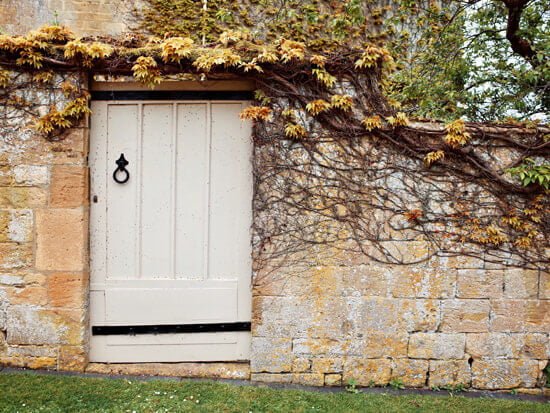 It was only when a recent family party led me back to the area of Broadway, I discovered that it was in fact, a tranquil escape for an amazing collection of craftspeople, writers, musicians and painters.

From the composer, Sir Edward Elgar to one of the founders of the Arts & Crafts movement William Morris, by 1880 the area had begun to attract a group of artists known as the ‘Broadway Colony’ but the resident of interest for me was John Singer Sargent.

Sargent first visited Broadway in September 1885 to recuperate from a head injury. He’d been invited to go to this sleepy village by his friend, the American painter Edwin Austin Abbey and it provided a much-needed break from the recent demands of Paris. 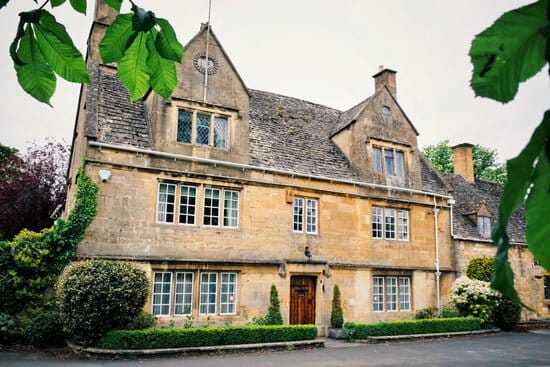 He stayed at Farnham House, home of the painter F.D. Millet, and it was here in the vibrant garden hidden behind this home that became the setting for one of John Singer Sargent’s most famous iconic paintings ‘Carnation, Lily, Lily, Rose’. 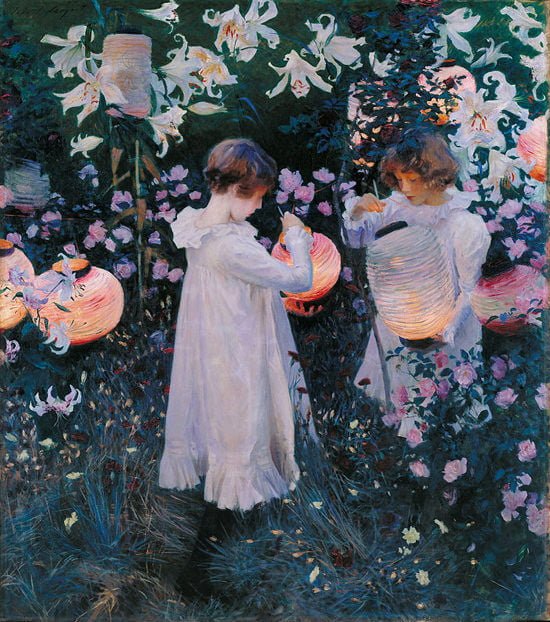 The subjects were Dolly and Polly the daughters of the illustrator Frederick Barnard, who also lived in the village

It has always being one of my favourite paintings of Sargent’s and was one of the few large-scale figurative pieces he created ‘En Plein Air’.

Painted over two Summer periods, he’d wait for the purplish light of dusk just after ‘Golden hour’ each evening, which is the time when the sun has set but the atmosphere is still filled with colour. Time was of the essence to capture this magical impression and he painted within a 25 minute limited time-frame before he lost the light.

His friend Edward Gosse commented on his technique:

“Instantly, he took up his place at a distance from the canvas, and at a certain notation of the light ran forward over the lawn with the action of a wag-tail, planting at the same time, rapid dabs of paint on the picture, and then retiring again, only, with equal suddenness, to repeat the wag-tail action. All this occupied but two or three minutes, the light rapidly declining, and then, while he left the young ladies to remove his machinery, Sargent would join us again, so long as the twilight permitted, in a last turn at lawn tennis.” Sir Edmund Gosse 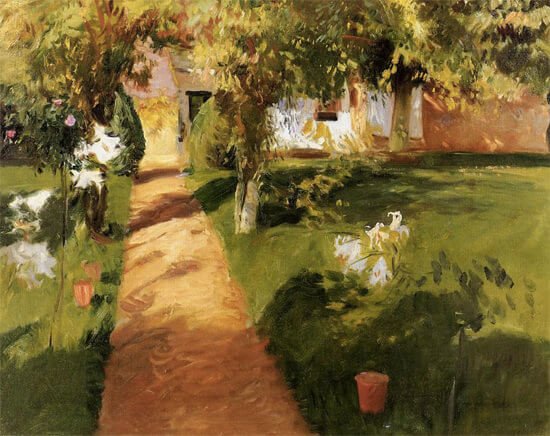 Sargent resumed work on Carnation, Lily, Lily, Rose for a second Summer in Broadway 1886 after spending the Winter in London. Anticipating his return, that Spring, Sargent sent ahead 50 Aurelian lily bulbs for the Millet family to establish, so he could recreate the scene at their new home in the village, Russell House.

And in the painting above of Russell House and Garden, you can see the pots full, ready and waiting.

Coincidentally, I’d been drawn to this painting when it was on display at the ‘Painting the Modern Garden: Monet to Matisse’ exhibition at the Royal Academy last year. At the time I didn’t appreciate the connection to the Carnation Lily Lily Rose painting. 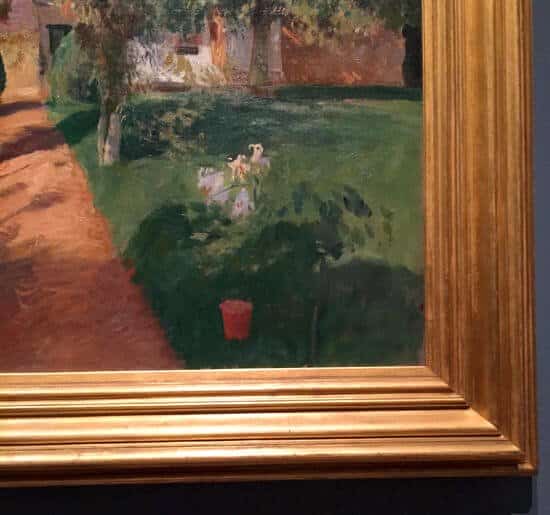 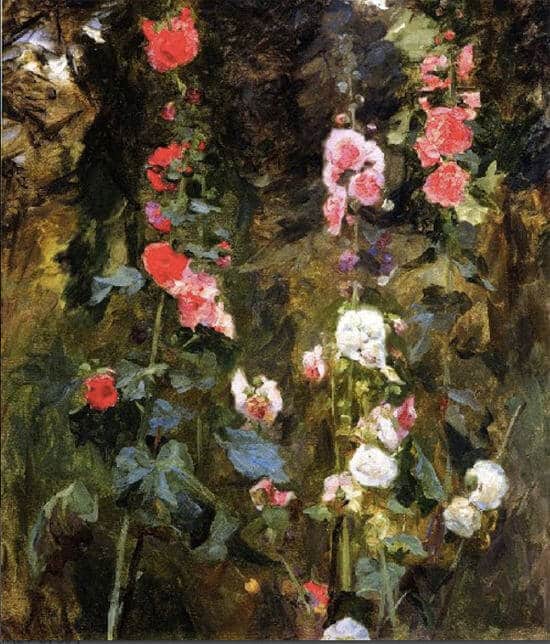 Pro tip: You can read more about the technical aspects and pigments used in Carnation Lily, Lily, Rose in this research review from British Art Studies.

The Power of Environment

It seems so obvious but it’s true, as an artist you respond to the environment that you’re immersed in and being back in the Cotswolds was a great reminder.

This concept of the power of environment was first ingrained into me when on a field trip as an art student at Pebble Beach in Dover, near Henry Moore’s Kingston studio near the Kent coast.

Our challenge for the day was to ‘Go and find a mini Henry Moore.’

Initially, I was skeptical, but when you started to really look at the pebbles on the beach there was a recurring theme. Smooth sea-worn pebbles with holes bore into them from the waves. The closer you looked and the more you searched you started to see the mini, live maquettes of the eventual huge sculptures that Moore created.

Sometimes it’s the environment that motivates somebody to be who he can be.

It was hard not to be influenced by the charms of the cottage garden where we were staying.
The bluebells were in bloom and the tall stone walls looked like they’d been dressed by the ivy and wisteria.

I came across these great old wooden steps. I loved the mossy green shadow, and if you cover over the mass of bluebells in the corner, it’s amazing how close in hue the rest of the scene is, from the greens reflected in the glass, the muted shadows on the ladders to the tonal trees in the far distance.

When you then add the blue back into the bottom of the frame, it breathes life to the whole of the piece. 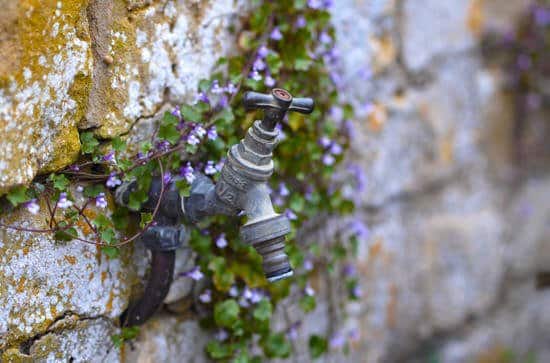 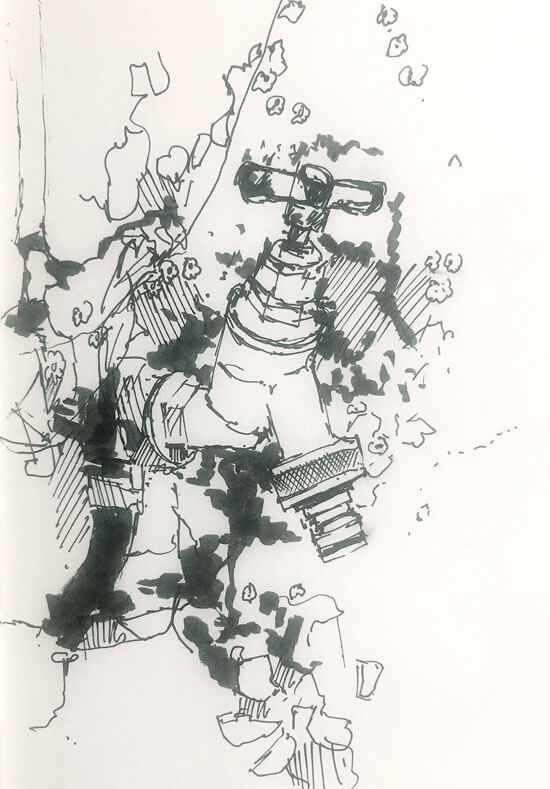 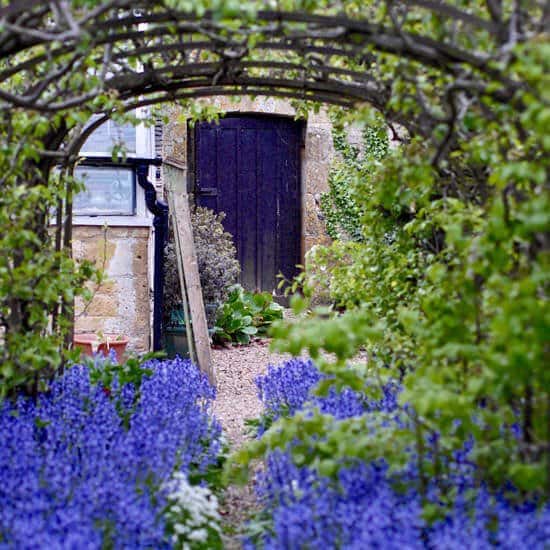 This blue adds an amazing path of colour to the floor of the curved metal pergola and the door in the distance acts as a dramatic dark contrast. 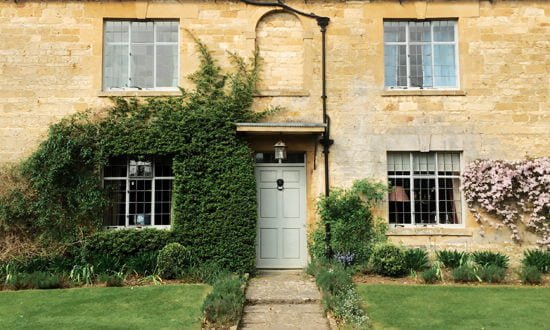 Here because you’ve got the ivy growing up the side of the building, it gives you a dark organic shape which softens of up the structure of the rest of the house. 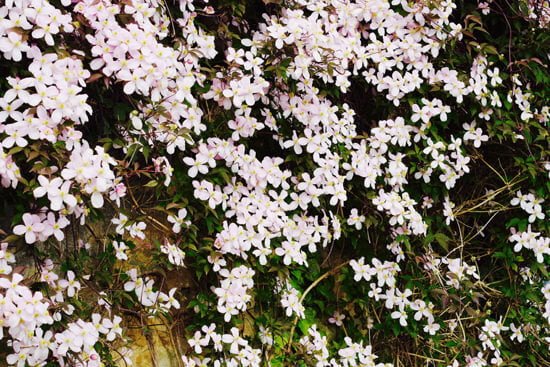 Flashes of colour on the right-hand side, are a great subject for painting, even as a photo they have a stylised painterly feel, due to the great shapes and contrast in tone.

For the sketches of the Wisteria below I used the kit above:

Pro tip: You can read more about my Essential Urban Sketching Kit here. 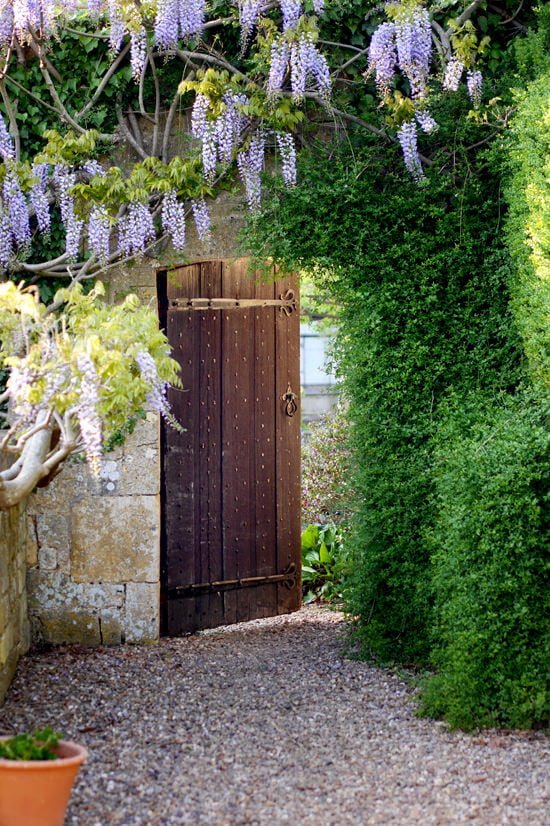 This fantastic wooden door just allows us to glimpse into the garden beyond, through a tunnel of wisteria.

You can see the setting sun reflecting on the door as it bounces onto it, and the small terracotta pot in the corner helps to ground our view. 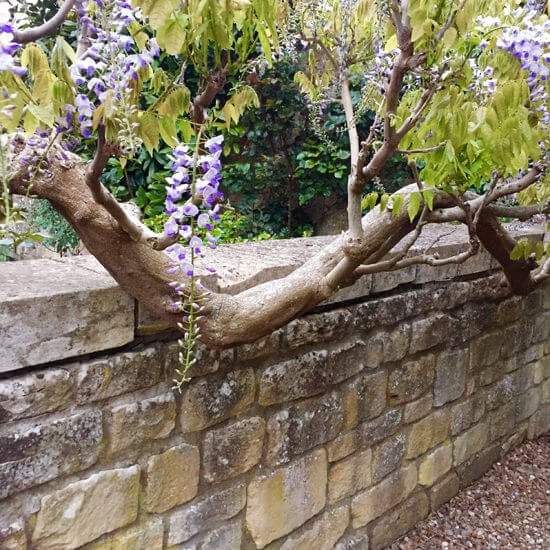 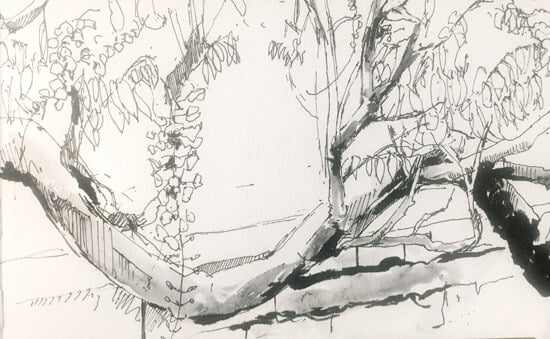 I started this sketch using the Muji 0.5mm Pen and was working on a landscape sketch pad (Moleskine 21cm x 13cm ) I then blocked in the dark shadow using the Pentel Brush pen. The subtle grey is created by a very slight wash using the water-soluble Lamy ink. 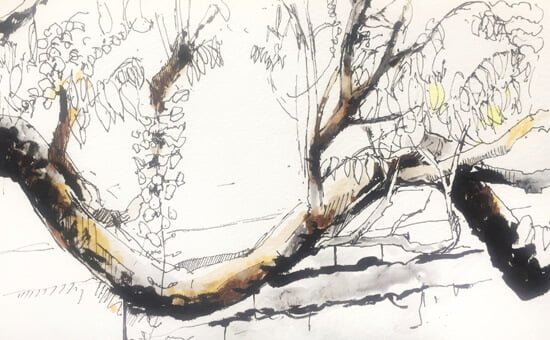 Here, I’ve pushed the darks onto the tree trunk on the left-hand side and added a few dashes of Burnt Umber and Burnt Sienna with the Watercolour markers. A few touches of the Lemon Yellow into the leaves, start to bring a lightness to that area. 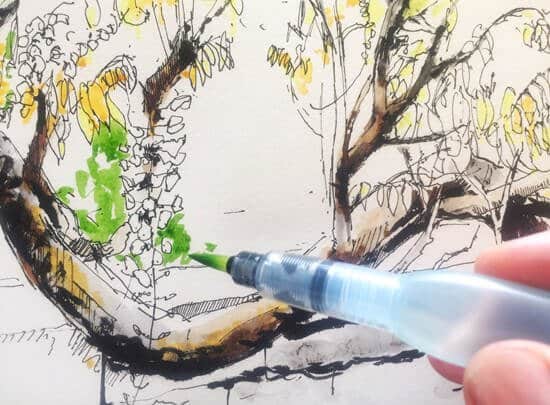 I’ve continued on with the Lemon Yellow watercolour marker to draw in a base tone of yellow onto the leaves. Then swap to a Sap Green watercolour pan. I use the Pentel Aquash brush pen to paint in the Sap Green around the shape of the Wisteria. 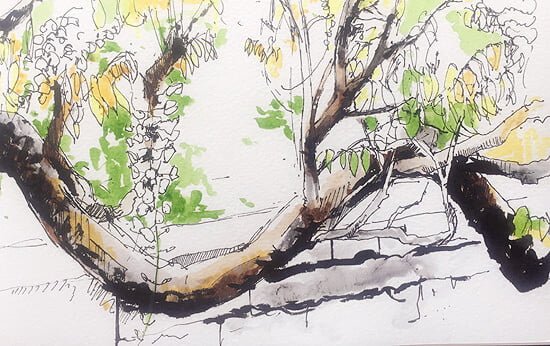 Here you can start to see the pattern of the brighter green moving across the piece. 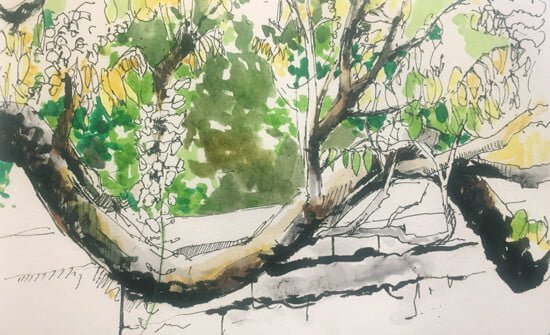 I now mix in some darker green using a Viridian watercolour pan and mute down the Sap Green with a tiny touch of Cadmium Red. 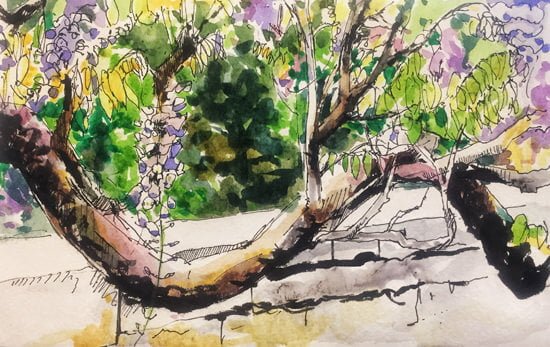 I think sometimes when you see a painting in isolation, in a gallery or book, you can’t imagine how much of a bearing external influences have had shaping that final piece. The landscape, colour harmony, light fall and level of contrast.

Even the friends around Sargent played an important part in creating his Masterpiece, and the injury that brought him to recuperate in Broadway is often described as “the happiest accident in his life”.

1. Singer Sargent & Friends – Exhibition Review
2. Landscape Sketching Course – How to sketch and work with pens and watercolour markers in the Landscape.
3. Inside Rembrandt’s Studio – Discovering the light of Amsterdam

Inside the Artist’s Studio, Ruben’s House & the Art of Antwerp