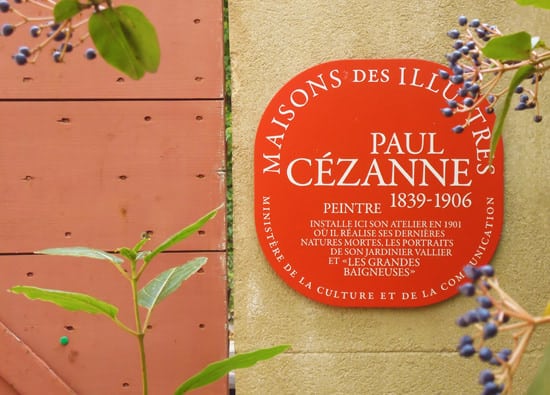 I knew we were in trouble when I opened the car door and brown water started flooded in.

The car had stalled.

The small country road we had driven along in brilliant sunshine only a few short hours ago was now a raging torrent of water.

I tried the electric windows, no power.

I saw the water was rising quickly, it was now half way up the car door.

I started to panic.

We were in Provence (just last month) on the trail of Cézanne’s studio, and our idyllic country retreat was rapidly turning into a disaster…

Another turn on the damp ignition key and the car spluttered back to life.

The electric window came down, and heavy rain water lashed in.

I turned to see how the driver was doing and all I could see was a pair of legs as she tried to climb into the back of the car to find her mobile phone.

Our driver (Sylvie the cleaning lady of our rented gîte) was frantically trying to phone a neighbour, in our broken French we could make out that Dominique had a 4 x 4 with a Winch, but Dominique was out and the water was rising.

The water started to lap over the bonnet.

I suddenly felt the car move, like we where being lifted up.

I came to the conclusion……….we were going to have to jump.

I really started to panic.

“We need to jump out of the window”

I turned around, imagining Vanessa poised to jump into the front seat and out of the window behind me.

Instead, Vanessa was hysterically laughing in the back seat of the car.

“I’m not jumping out of a car window, we’ll be fine” she said.

The next 5 minutes were a blur.

My technique to try and convince Vanessa to jump out of the car window into raging water was just to repeat ‘VAN..NES..ER” louder and louder. Sounds of hysterical laughter from Vanessa intermixed with a variety of French swear words came from the back seat.

The car inched forward, it was like a snow plow with water being parted, the water splashed onto my arm over my open window, I inched up the window, the exit route was looking narrow!

I was about to perfect my Olympic duck dive attempt, but one last roar and the car miraculously pulled out from the river road. In an instant we had crossed the chasm, we then proceeded to drive at breakneck speed into town in complete silence.

I later learned that the Boulangerie closed at 1.00pm on a Sunday (it was 12.55pm)  and apparently the thought of us not having ‘du pain’ on a Sunday seemed to be a powerful motivation for driving through waterlogged roads! 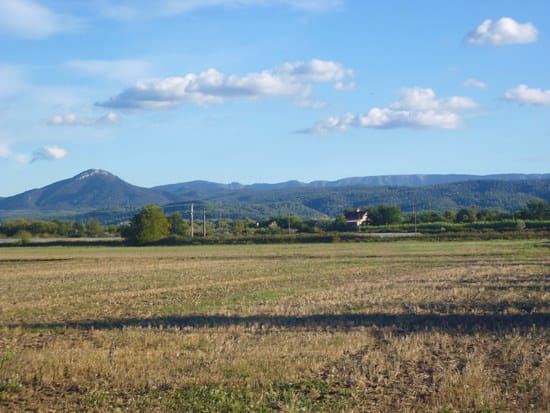 View from our gîte south of the Luberon, Provence.

When we came out of the Boulangerie, armed with my own bodyweight in bread and croissants, the sky had cleared and our driver was calmly smoking a cigarette resting on the bonnet of her car. Seemingly oblivious to how close we actually were to being washed down the road (Dominique mentioned later that there was indeed a river at the end of the road, a mere 30 metres from where the car had been)

I was now affectionately known as “Indiana Jones’ by the neighbors.

The next morning was a beautiful sunny day, as were the next couple of weeks and we finally made it to Cézanne’s studio. It was hidden amongst the trees on a steep slope to the North of Aix-en-Provence.

Aix is a really lovely city with elegant architecture, charming side streets with delicious smells tempting you as you wander down the narrow lanes. Cézanne grew up here and dotted around the center, especially the grand tree lined ‘Cours Mirabeau’ are many traces of his past. 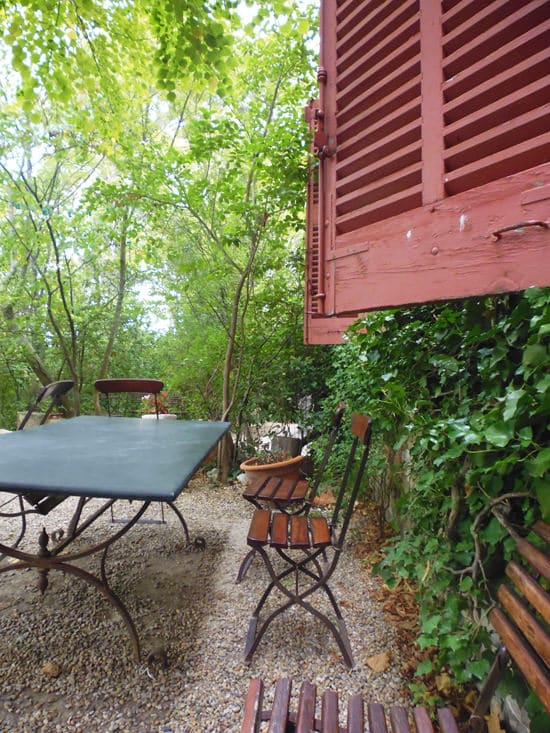 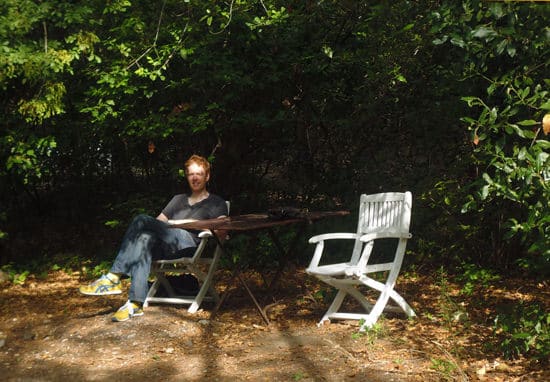 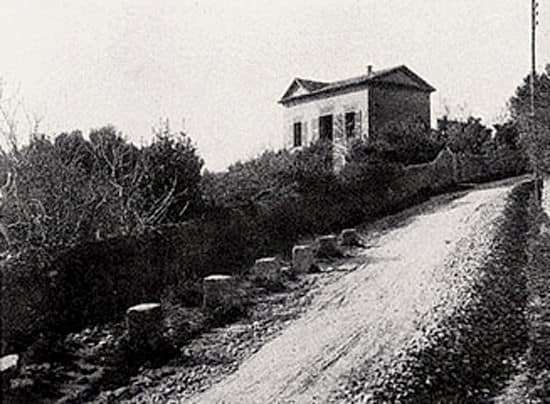 His Lauves studio in Aix was built on an isolated road in 1902, that at the time was called the Chemin des Lauves and is now named Avenue Paul Cézanne (although it is still called Chemin des Lauves further north) and originally Cézanne’s view was left clear so he could see the surrounding landscape.

It was close to one of his favorite subjects, Mont Sainte-Victoire. 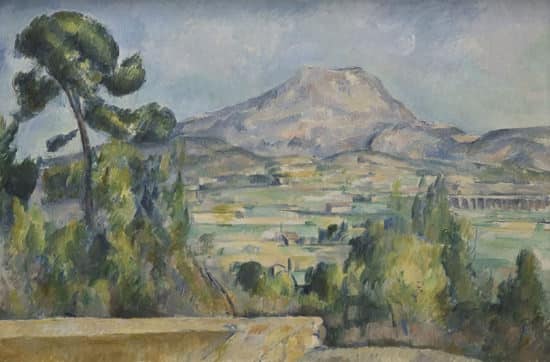 The studio was on the first floor and was squarer than I had imagined.

There were windows on both sides, shuttered to the front and a solid bank of glass to the rear but what was really fascinating was, there are so many of the objects from his paintings and his personal palettes and equipment, it really felt like he’d just popped out.

I had to disagree.

One of the first things I noticed on entering the studio was a ‘daybed’ that had a remarkably similar resemblance to one I had just purchased for my studio. Both had a canvas finish, both had only one Cushion. It appears that afternoon naps seem to suit artists of all generations! 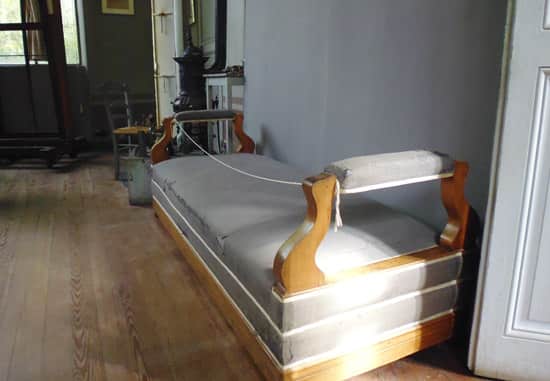 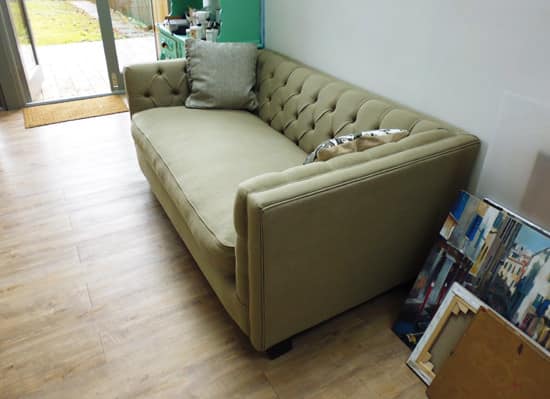 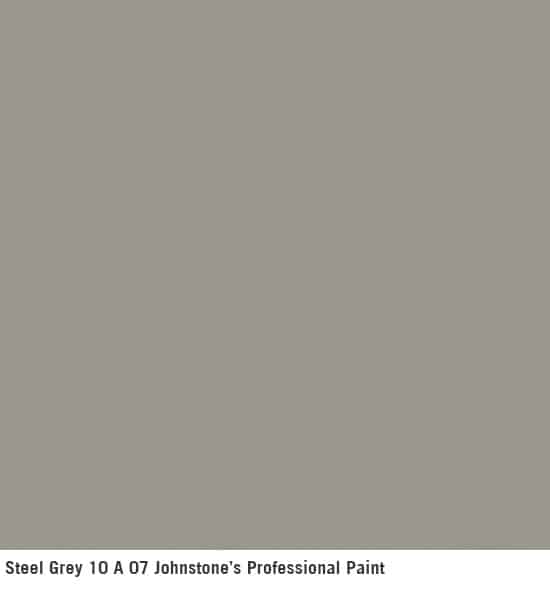 I’ve tried to colour match it as best I can remember, but the light in the south of France is much different than the middle of England!

One of the most intriguing features of the studio was a narrow door, built into the side of the studio. Cézanne had it built in so he could move large canvases in and out of the building, a genius idea! 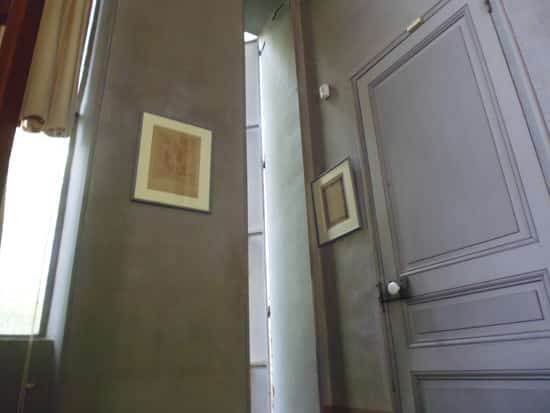 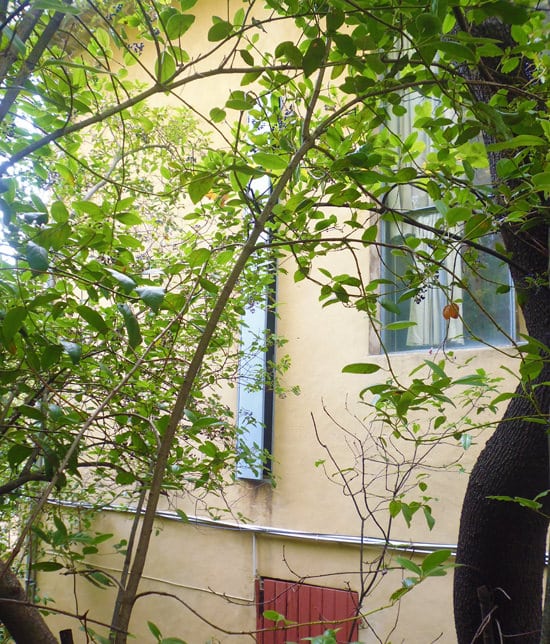 The narrow door for large canvases from outside the studio

His still life setups, skulls, oranges and palette’s were still present around the studio as were his hat, cane and painting satchel. 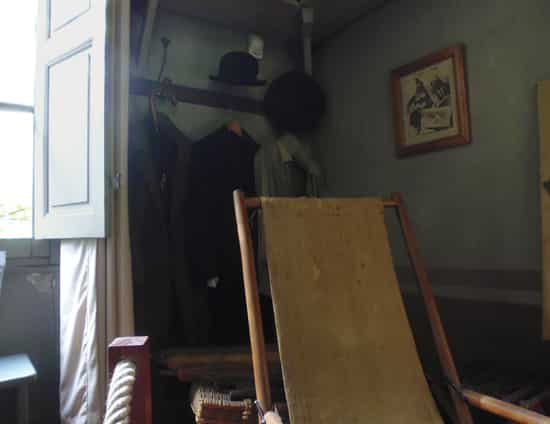 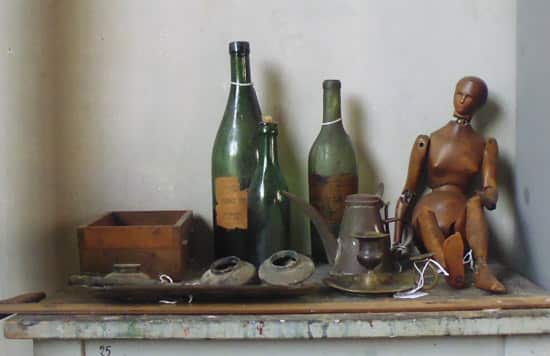 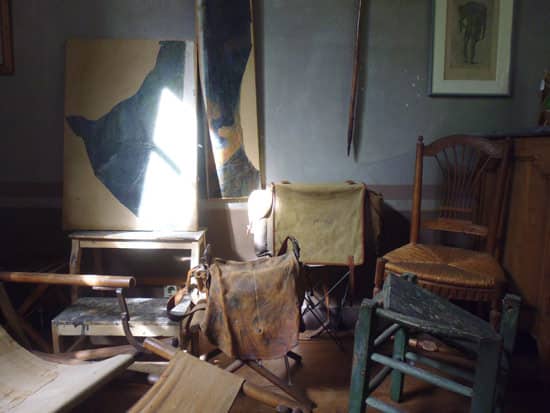 Cézanne was a late bloomer

If you’ve read stories of Picasso you could fool yourself into thinking creating art and learning to paint is only for the young geniuses.

But you’d be wrong, Cézanne was a late bloomer.

Its never too late to re-invent yourself, or try a new creative path. What are we afraid of and why are we waiting for the ‘perfect time to start’?

Many of our first new creative endeavors can seem amateurish, but Cézanne had his own artistic struggles and personal doubts throughout his career.

1. He thought his drawing sucked

He struggled for much of his painting career with his classical drawing skills which he felt were weak.

Many of Cézanne’s paintings use distorted perspective and shapes took on a more abstract feel than many of his representational contemporaries.

He liked to break down the composition into simple shapes, but some other artists of the time found his compositions a bit too ‘out there’ and he was even petitioned after one Impressionist exhibition to have him banned from other shows because his work was too controversial – Imagine that!

“With all his rare endowments, he happened to lack the comparatively common gift of illustration, the gift that any draughtsman for the illustrated papers learns in a school of commercial art; whereas, to realize such visions as Cézanne’s required this gift in high degree.”

Cézanne tried to improve his drawing skills by copying Old Masters in the Louvre when he was living in Paris. It is said that he hated the Paris Salon, but continued to try and enter it every year even after failing to be accepted to the Paris Salon, École des Beaux-Arts.

When painting a portrait of the Art critic Gustave Geffroy who had written several articles praising his work, it took Cézanne 3 months and over 80 sittings …. after all this Cézanne announced the portrait a failure.

3. Cézanne had a bad temper

He was notorious for slashing his canvases when feeling frustrated with his painting, and on one occasion whilst painting a portrait, walked away from his easel, tore 10 watercolours from the wall, threw them in the fire and then proceeded to continued the painting with a new sense of calm!

Mmm, it’s time for a lie down on that couch again.

Cézanne was painting for many years but he also had a lot of guidance.

Cézanne had a mentor & coach

Cézanne had quite a dream team around him to encourage and help him with his career.

The Success Coach  – Émile Zola, the writer who Cezanne grew up with who took him to Paris, advised him on budgeting and was a constant encouragement to his paintings.

The Painting Tutor – Camille Pissaro who often painted alongside him in the fields. He taught him the basic skills and techniques of how to be a better painter.

The Art Dealer – Ambroise Vollard, the French Art dealer who tracked down Cezanne’s work and brought it to a bigger audience. In 1895 Paul Cézanne held his first solo exhibition in Paris and Ambroise Vollard bought every artwork.

The Banker – Louis-Auguste (Cézanne’s Dad) Cezanne relied on the ‘bank of Mum & Dad’ , literally, to fund his career as a young painter. His father wanted him to become a Lawyer and he studied Law for a couple of years, but painting was his true passion. He was in a privileged position to experiment with his paintings whilst he dad tried to encourage him to be a Lawyer.

The Pet Parrot – To encourage himself Cézanne taught a pet parrot to say “Cézanne is a great painter.” (Seriously he did do this)

“But for Zola, Cézanne would have remained an unhappy banker’s son in Provence; but for Pissarro, he would never have learned how to paint; but for Vollard (at the urging of Pissarro, Renoir, Degas, and Monet), his canvases would have rotted away in some attic; and, but for his father, Cézanne’s long apprenticeship would have been a financial impossibility. That is an extraordinary list of patrons. The first three—Zola, Pissarro, and Vollard—would have been famous even if Cézanne never existed, and the fourth was an unusually gifted entrepreneur who left Cézanne four hundred thousand francs when he died. Cézanne didn’t just have help. He had a dream team in his corner.”

Malcolm Gladwell – The Emergence of Talent: Genius and Precocity: The New Yorker

Over 100 years ago this month, Cézanne left his studio to paint the same scenery in Provence on foot.

He was also caught in an unexpected Provencal thunderstorm.

But for Cézanne, the unpredictable weather took its toll, he collapsed in the rain.

He was taken back to his house by a passer-by but died six days later on 22 October 1906 from pneumonia at the age of sixty-seven.

Instead of saying ‘one day, some day’ and reading another article about a soggy baguette, take action on your creativity.

Don’t waste time, keep going through your harshest critics (which is often yourself) and try starting today.

How to Paint a Cornish Harbour in Acrylics – Video Tutorial