Why do mountains look blue in the distance?

Have you ever wondered why a hill, that you know is covered in green trees, looks purple or blue when viewed from a long distance away?

Trying to create a sense of depth and distance in your landscape painting is key for creating realism in your paintings.

The simplest way to do this is with Aerial perspective… 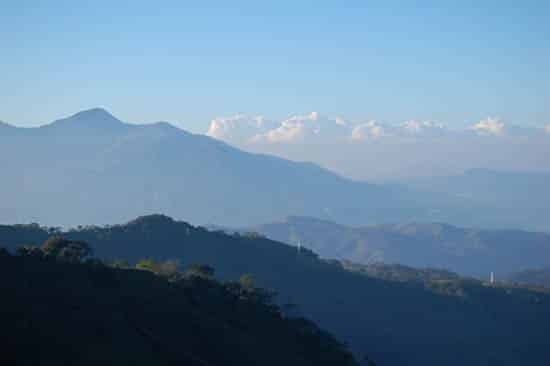 What is aerial perspective?

Aerial perspective is the optical effect that the atmosphere has on objects viewed at a long distance.

For example, in the daytime, a mountain range will usually appear bluer and lighter as it gets further and further away from us.

The air in the atmosphere contains various impurities and these act as a filter stopping certain wavelengths of light reaching our eyes.

This gives the illusion of a change of colour and value.

Cool colours like blues and greens get through the ‘filter’ of air more easily than the warm colours so mountains usually appear bluer.

Leonardo da Vinci noticed and studied that as a landscape recedes from the viewer its colours and tones alter due to the nature of the atmosphere.

You can see this in his painting above where he has cool blue muted mountains in the background, and warm browns in the foreground.

It is sometimes referred to as atmospheric perspective.

What effect does aerial perspective have on landscape painting?

Change in colour –  A green tree will quickly appear purple, then blue as it receded into the distance.

Change in tone – Everything gets paler, the atmosphere not only affects the perceived colour in front of us but the tones, how light or how dark, each area of the landscape is. The changes are most noticeable in the dark tones, (just like the dark colour tones)

You can see in this photograph how obvious, now it’s in black and white, the tonal value changes are.

It is also useful to note how the crispness of line also alters, making the very back mountain quite blurry.

Pro tip: It is often a good tip when painting to blur the furthest mountain into the sky, You can blur it more than you would initially think and the viewer will ‘create’ the mountain in their mind.

Middle ground: cooler green (towards blue)- green/purple hue to the shadows
(the lighter areas will also change but only a little cooler green, rather than a complete change in hue)

Everything gets lighter in value as the distance from the viewer increases, as the landscape hits the horizon line it is often very similar in value to the sky.

The areas that are lighter in value near the front of the scene will hold onto their value for longer, the darks will turn to midtone quickly. Pure whites hold on to their value for a long distance so you can still use titanium white to indicate houses in the far distance as in the painting above.

A note on clouds 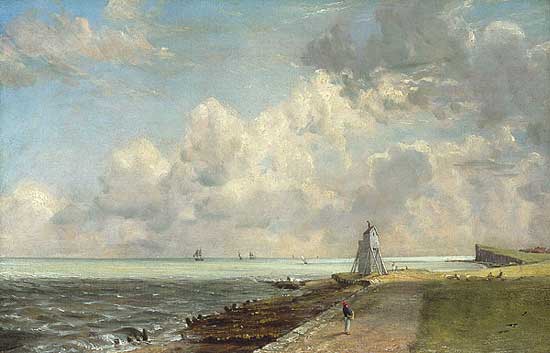 Pro tip: Clouds grow darker as they recede, instead of lighter, and they grow warmer instead of cooler. So on a clear day with clouds in the sky, the clouds become yellowish as they recede, and those way off in the distance will be pinkish.

1. How to draw perspective for beginners
2. The secret of good composition

How to Apply a Varnish to an Acrylic Painting